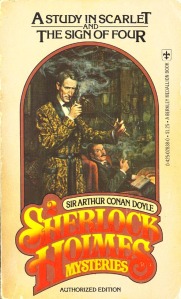 I am happy to report that, 17 days into the New Year I am holding strong with my commitment to the TBR Dare. Let’s leave out the minor little detail that I’ve only read about 15 pages of anything so far, making it very easy to stick to said commitment, shall we?

I’ve decided to start the year the way I had initially intended to end the previous, with some good Detective fiction. Somehow the Holidays pushed everything around, and I’m only just now getting to the first two Sherlock Holmes stories, A Study in Scarlet and The Sign of Four. The Holmes set I have (which is actually my Dad’s, but has been gathering dust on my shelves for well over a year, and therefore, I believe, fully qualifies for TBR) combines these two earliest Holmes novels into one book. I’ve been meaning to read some of the stories of the great detective since the 2009 movie came out, and here we are in 2011 already….but what’s really got me in gear this time was the modernized version shown on PBS this past fall. The series was fun, sharp, and, I believe, seemed to more accurately represent the character of Sherlock Holmes as portrayed in Sir Arthur Conan Doyle’s books. I’m not very far into the first story yet, but I’ve already been amused by the circling of time. When we first meet Dr. John Watson, the narrator of the stories, as well as roommate of Holmes, he has just returned from war in Afghanistan, listing off towns and provinces no doubt familiar in Doyle’s time–and now in ours as well. Needless to say, the BBC/PBS version was able to fashion Watson as a wounded Afghan war vet as well.

With detective stories on the mind, I decided to finally finish another list—Detective Stories & Mysteries. I am much more familiar with this genre than Italian literature, as I have read many, many mystery novels over the years. My recent readings have been somewhat of a letdown however, not to mention I’ve somehow missed some of the earliest, classic stories, so I decided to direct my attention primarily to the earliest stories. As with my previous list, I consulted 1001 Books You Must Read Before You Die for ideas. I also browsed the Wikipedia pages on authors from the “Golden Age of Detective Fiction.” My focus on the early stories does mean that I am short on contemporary mysteries and on those by non-American or British authors, so if you know of any really good ones, please chime in!

*In researching titles for the list, I discovered that at least one scholar considers Mademoiselle de Scudéri by E.T.A. Hoffman the first published detective story.