I seem to have been in a reading slump lately. I could certainly without difficulty assign blame to any number of distractions, make my excuses. But if I’m honest with myself, I think the first reason above all others is that I haven’t been making time for reading. Reading of books, that is. I’ve been reading blog posts and reviews. Just not books. (Excepting a few very exciting chapters of Architectural Graphic Standards. Ha.)

I want to read books. I keep looking at my finished and partially finished lists, adding books and authors and entirely new categories as the whim strikes me. I’ve read about authors, winnowing down which books are the top selections by the more prolific writers, discovering lesser known novels which I can hope are gems.

I think perhaps this may, indirectly, get at the heart of my present reading problem. Right now, for whatever whim or reason of my fancy, I’m in a mood to read about books. And I’ve been trying to read a detective story instead.

This is absolutely nothing against Sir Arthur Conan Doyle. I’ve read some of his non-Holmes stories in the past to much amusement. I believe I may have even read a handful of the Holmes mysteries. I am absolutely certain that when my brother and I were little our dad read us The Hound of the Baskervilles and some of the short stories. The fault is not Doyle’s, nor the genre. 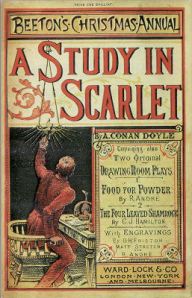 I finally managed to finish the very first Holmes novel, A Study in Scarlet, over the weekend. This is the story that introduces both us, the readers, and Dr. John Watson, the narrator forever linked with Holmes as his “sidekick,” to Sherlock Holmes. It is a story meant to amaze us with the deductive powers of Holmes, contrasted with the incompetence of the Scotland Yard. Perhaps I am too familiar with the character, for while I am impressed by Holmes’s capacity for recognizing the importance in the smallest minutiae and his ability to so swiftly assemble the complete clue set into a reasonable solution, I was also struck by the actual ability of the Scotland Yard detectives, at least in this first story. Although the conclusions that Inspectors Lestrade and Gregson separately drew were both flawed, this was primarily from a failure to account for the entirety of the evidence at hand. The paths they took in their investigation of the crime were both logical, not at all out of line with a typical police procedural. Gregson sought to determine the whereabouts and activities of the victim in the hours leading to his death; Lestrade sought out his known associate. Both are common features in contemporary procedurals (I haven’t read enough older ones to comment). Both inspectors learned what they sought without needing direction from Holmes. In this story, at least, they did not seem to me the complete dolts Holmes makes them out to be.

Perhaps this is a sign of Holmes’s extreme intelligence, at least regarding the detective sciences. He knows so much more than those around him—and knows that he does—that he cannot help but disdain much of their efforts. I also must admit, he knew the murderer’s identity long before either inspector had recognized the error of their own conclusions. But there seems something missing from his investigation. Without the exertions of Gregson and Lestrade, we would not have known of further crimes or the true character of the vicitm. Holmes, in this first story at least, seems too distant, too calculating (one could rather imagine him a master criminal, if only to prove his abilities). Watson provides humanity to the action, affected as he is by the sight of violent death—reminding us that murder is ugly indeed. Lestrade and Gregson, on the other hand, not only provide a foil to Holmes’s abilities, they round out the full picture of the crime.

Having completed this, I am not surprised that A Study in Scarlet is both Doyle’s first novel and one of the earliest detective novels. The lengthy interlude of part two, providing the reason for the crime, seems at odds with the rest of the novel. It is not narrated by Watson, has the flavor more of a western romance than a detective story, and just simply goes on too long. The reader is held by the desire to learn the resolution of part one rather than any inherent interest in part two. This suggests to me that Doyle was still feeling out his genre. The conventions had not yet been firmly and completely established, either for Holmes or for detective fiction. Given the popularity for the detective that would shortly develop* I assume that both Doyle’s storytelling and Holmes’s personality would improve with time. Either that or the general reading public has long been fond of cold but extremely intelligent detectives!

* A bit of a spoiler that seems to be common knowledge (I’ve not read the involved stories, yet I’ve known this bit of trivia as long as I can remember): Doyle would later try to kill Holmes off that he might concentrate on historical fiction, but public demand caused him to revive the detective. Today we typically forget that Doyle even wrote other novels.

4 thoughts on “Completed: A Study in Scarlet”