If you’ve looked at my 2012 reading list, you may note that I’ve read quite a few children’s books this year. And yes, you may infer from this fact that I still love children’s literature. While I’ve read quite a few of the “greatest hits” over the years—Little Women, Anne of Green Gables, The Witch of Blackbird Pond, the Little House books, The Chronicles of Narnia—there are still many I’ve missed. So back a few months ago when the Classics Club was looking for someone to host a January Children’s Classic Read-a-long, I jumped at the chance. Even better? Jean of Howling Frog Books will be posting a series on lesser-known children’s authors during the month of January as well.

I decided that rather than simply host a read-a-long, which can be limiting, I’d do something more along the line of Carl’s wonderful R.eaders I.mbibing P.eril event, with one part RAL and one part read any children’s classic(s) you wish. The event will take place in January, and despite the “challenge” in the title, is meant to be a fun opportunity to explore classic books from childhoods past that we may have forgotten or overlooked.

I know my blog doesn’t have that large of a following and there are already some wonderful events being planned for January, so I do feel a little shy about posting this, but I’m hoping that a few of you will join me as I dedicate a month to children’s books. Please let me know in the comments of this post if you are interested in participating, and let me know if you have any questions. Over the weekend when I was working on logos, I got a little Photoshop-happy, so please feel free to use any of the following on your own blogs. I’m just posting the small 200-pixel wide versions, but if you’d rather use a 400-wide version, let me know. 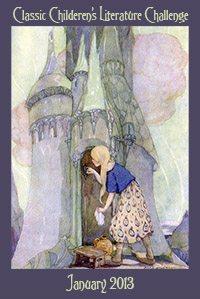 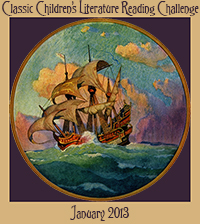 P.S. If you’re like me, you never get as much done in a month as you intend, so feel free to start reading now and post in January. As a warm-up, I believe a number of bloggers, led by Bellezza of Dolce Bellezza and Amateur Reader(Tom) of Wuthering Expectations will be reading Little Women and Good Wives (combined as Little Women in the US), for discussion the first week of January or so. This would be an excellent start to the month if you wish to read along, and I don’t think they’d mind.

Image sources: The primary logo is adapted from an illustration by Scottish illustrator Anne Anderson, and was found on Wikimedia Commons. The ship logo is adapted from ‘Snake and Hawk’ headpiece illustration by N.C. Wyeth, as digitized by plumleaves and found on Flickr under a Creative Commons license. The image for the RAL logo is from a cover illustration for The Princess and the Goblin from a 1920 edition illustrated by Jessie Willcox Smith. A web version of this illustrated edition is available HERE.

The Trumpet of the Swan – E.B. White