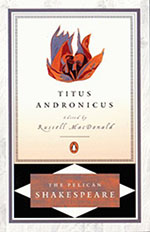 I began my reading of Titus Andronicus knowing little about the play or its plot, not even whether it was based on a true story from Roman history or a purely fictional invention (answer: fictional). The only thing I knew was that it has a reputation for violence and gore and even a bit of cannibalism–all of which is true enough, and let’s not forget adultery, rape, and racism. That these are the takeaways from Titus Andronicus –in contrast say to fellow revenge play Hamlet or tragedy King Lear–suggests what is indeed true: Titus is one of the earliest of Shakespeare’s plays, perhaps his earliest tragedy, and he is still feeling his way. There are no grand philosophical monologues and what humor that is here to temper the horror is of such a nature that you are almost afraid to take it as such. That is, other than some clearly humorous lines from the Clown, one cannot be sure if the seemingly purely evil Moor, Aaron, is making twisted jokes and if we should even laugh at them. (For that matter, I am not even sure if the racism is Elizabethan, Roman, both, or somewhere in between.) Although I often find on finishing a play that I want to see a production, here I find that the stark violence of the imagery–even though the worst is off-stage–causes me to hesitate at seeking any version out. It is perhaps too easy to understand why the play fell out of favor, especially with the Victorians.

On the other hand, acknowledging the horrors of our nightly news–beheadings and revenge and mass slaughter did not depart our world simply because we for a time removed them from stage–perhaps there is something to be learned from the play. The entire cycle of violence is put into motion, when at the end of a successful military campaign, the protagonist, Titus, brutally murders the son of Tamora, the conquered queen of the Goths, both his prisoners of war. This war crime–as we would now style it–sets into motion a series of ever increasing horrors, until the reader or audience begins to wonder if anyone will be spared. Revenge begets revenge. Yet, in the same tradition as contemporary horror cinema, you cannot look away, even if watching between your fingers. The cycle of violence is not the only motivation explored, either. Lust–for both power and flesh–is evidenced in several characters, and in the end leads to the the same terrible consequences as the mad revenges of Titus and Tamora.

But perhaps what is most important to take away from Titus Andronicus is this: in the end, the person our hatreds and revenges will ultimately destroy is ourself, leaving our battered loved ones to pick up the pieces.

I read Titus Andronicus as one of my Classics Club titles and for Shakespeare 400.