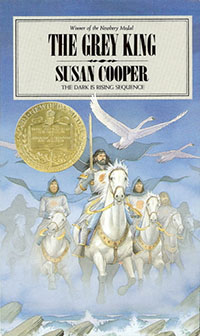 I’ve been slowly revisiting The Dark is Rising Sequence over the past year and a half or so, inspired to reread this favorite childhood series by my reading of Maggie Stiefvater’s The Raven Boys. (And after I started my reread, I learned that she was indeed inspired by Cooper’s work.) I haven’t been blogging about these for the most part, but since I’ve included the last two on my 15 Books of Summer list, I thought I’d write up just a little bit.

The series in general–five books in all–is inspired by Arthurian legend, but set in the present day (roughly 1960s/70s, when it was written, though it really doesn’t feel that dated and could equally be now). The first book, Over Sea, Under Stone, was a grail quest, as the three Drew children sought to retrieve the Hold Grail before a group of adult adversaries can. It ends with the Grail in a museum and the tantalizing suggestion that maybe The Merlin has been helping them along the way. And there, I understand, Cooper originally intended to leave it. It was only some years later that she added on the other four books, to round out a series depicting a great battle between the Light and the Dark, a battle ongoing since at least the time of the great King Arthur. The books from this point bounce between protagonists: Will Stanton, the last (and youngest) of the Old Ones, is introduced in book two, The Dark is Rising, where he must search out and retrieve the six signs by Midwinter’s Night. In book three, Greenwitch, the Drews return as protagonists, when they “happen” to meet Will in a small town in Cornwall (the setting of the first book) where they must rescue the stolen Grail back from the Dark.

The fourth book, The Grey King, returns to Will’s point of view. He has been sent to Wales to recuperate after a severe illness. While there, he meets a strange boy, Bran, and Bran’s dog Cafall, and discovers that he will need their help in retrieving a lost gold harp meant to wake the “six sleepers” whose aid the Light will need in their upcoming battle against the Dark. Over the course of the story, Will and Bran will also learn the surprising backstory to Bran’s arrival in Wales and that Bran’s help may be needed for more than finding the harp.

Although commonly classified as fantasy, The Dark is Rising sequence has long felt to me more akin to the myths and legends of long-gone times: of King Arthur, of Brenin Llwyd. Perhaps, in our cynical, rational age, this is a fine distinction. After all, we know that magic doesn’t exist–at least not as defined in fantasy tales. But when I find myself considering what book might most naturally follow next after these, it is the old legends and stories I think of, not more contemporary writers. Cooper, by drawing in bits of stories she only borrows, pushes me towards seeking out stories I don’t yet fully know. And if that is the result of reading one book, to be pushed toward others, I would say that the writer has been successful in their telling.

I read The Grey King as part of my Classics of Children’s Lit project and as #2/15 for the 20 Books of Summer Challenge.

2 thoughts on “Completed: The Grey King”

The Mysteries of Udolpho – Ann Radcliffe

So Good They Can’t Ignore You – Cal Newport