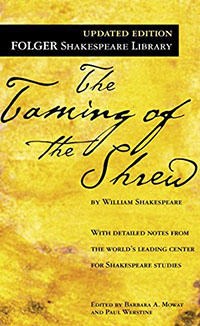 This was a reread, I believe. (Going by memory.) At the very least, I have seen it performed live, locally (out-of-doors, actually, with a mock-Tudor (c. 1920s) gatehouse for a backdrop–a great setting!). Like so many of Shakespeare’s comedies–or perhaps like any play–, the actual humor is better seen performed than read. But that did not mean it was not an enjoyable read, though I fear I do not fully understand it.

I believe it is fairly well known: a young man, Petruchio, desiring to increase his wealth, agrees to marry a shrewish woman, Katerina, so that her father will permit her sister, Bianca, to be wooed and wed. (A friend of Petruchio’s is one of Bianca’s several suitors.) He then proceeds to “tame” Katerina, by methods that, if taken at face value and/or by 21st century standards seem downright abusive. But if they are rather seen as part of the farce of a play–no, not merely a play, but a play within a play–perhaps I begin to now see the value of the Induction?–then perhaps the story is something different, a comedic look at relationships between men and women and how they play each other rather than purporting any moral or life lesson.

Interestingly, reading around, including the introduction to my copy, it seems to be a play that is tricky to interpret: while it is easy to assume, especially based on Katerina’s last speech, that Shakespeare was indeed a product of his time and to be reminded that in that era women were property, it seems that the director’s interpretation is what really guides our understanding. Perhaps Katerina has truly been “tamed”–or perhaps she has simply learned a better way of controlling her husband and winks at the audience. It does seem, though, based solely on the words on page, that she really is a vile character, for she treats her sister dreadfully. Though, one has to wonder: is this jealousy of Bianca or a desire to avoid marriage and its risks and constraints at all costs?

After reading this, I also watched the 1967 film version starring Elizabeth Taylor. Which, while amusing, I must confess my favorite adaptation remains 1999’s 10 Things I Hate About You, which is both a clever high-school-set modernization and a perhaps tamer version of all characters involved. I’ve still to watch Kiss Me Kate, though, and I do have a weakness for musicals, so…

I read The Taming of the Shrew as part of my original Classics Club list.

2 thoughts on “Completed: The Taming of the Shrew”