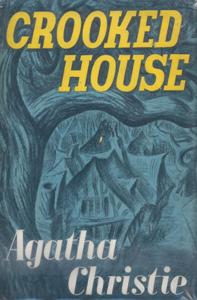 It’s been a long time since I’ve read an Agatha Christie. High school, in fact. But when I chanced upon a trailer for Crooked House, I couldn’t help but be intrigued—it referred to Crooked House as Christie’s most “twisted tale.” Having now read it, I’m more inclined to continue to think And Then There Were None as the more “twisted” of her novels. However, the mystery itself does indeed prove that the titular setting of much of the action is well named, and not merely for its physical appearance.

The victim is family patriarch, Aristide Leonides, and the cast of suspects his household: largely family, both by blood and marriage, but also including a former nanny and a tutor. Over the course of the novel, it appears at any given time that all occupants may have quite a suitable motive to wish Aristide dead—but which is the real killer?

This is the question that narrator Charles Hayward sincerely wishes to know the answer to, for Aristides’ granddaughter Sophia will not consent to marry Charles unless the mystery is solved, so concerned is she by who might actually be the responsible party, and that a dark cloud might hang permanently over the family.

I confess that, although Christie laced Crooked House with plenty of clues as to the identity of the killer, I never did stop to think about it long enough—or perhaps pay close enough attention!—to discern it for myself. But that did not prevent my thorough enjoyment of the fast-paced mystery, or my appreciation for the clever way in which Christie lays it all out both for Charles and for us while also hiding just enough that we can choose to stay surprised if we wish.

Read as a classic crime story for Back to the Classics.