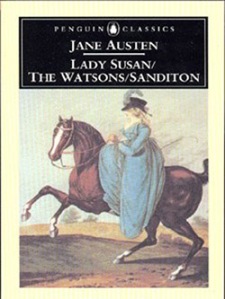 It is a pity that Austen didn’t live to complete her final novel.

Although I picked Lady Susan/The Watsons/Sanditon off my shelves intending just to read Lady Susan, which was completed, though unpublished in Austen’s lifetime, in the end I decided to reread the two unfinished novels as well.

The first time I read this collection, I was disappointed primarily that The Watsons was left hanging–Emma’s story held so much interest to me. But coming at it years later, I realized that there are so many elements of The Watsons in her other novels that the plot seems anticipatable by inference, while on the other hand Sanditon appears to have just enough variation from Austen’s “norm” that it tantalizes with a world of possibilities of what might have been. While I would assume the marriage plot elements of her complete novels would be present, there’s little enough of the novel (though ever so much more than The Watsons) that I can’t say for sure who would end with who, though I may make some guesses. Nor, perhaps more importantly, can I be sure of which characters will see growth–for there are plenty of silly, or perhaps in the case of Sir Edward, dangerous, characters. Will Arthur Parker remain indolent or will a pretty girl prompt him to action? Will Sir Edward remain on his path of intrigue, or will rejection strike sense into him? (Doesn’t seem likely.) And perhaps the biggest question of all: Will Sanditon see success as a holiday town, or was part of Austen’s satire to be its failure, or even just indifference? All such questions must remain only in speculation, alas (though there seems to be no shortage of continuations by other authors).

Lady Susan, on the other hand, is very much finished. According to the introduction in my copy, Austen had even written it out in a fair copy, but did not submit it for publication, perhaps because she was unsatisfied with the epistolary style. While the style leads to a quick read, it does place limitations on how much of the story we can see –for only that which can be told in a letter can be portrayed.

There is exquisite pleasure in subduing an insolent spirit, in making a person pre-determined to dislike, acknowledge one’s superiority. (Letter 7, Lady Susan to Mrs. Johnson)

Lady Susan herself is a frequent contributor to these letters. A widow with a teenage daughter, it seems plain that her ambitions are to get her daughter out of the way–by way of a wealthy husband, if at all possible–and to perhaps make a new match for herself, or at least to divert herself a while until she can, perhaps, resume her affair with a married man. She is clearly a clever woman, and one with much spirit, who seeks her own amusement and entertainment, feeling little true sympathy for others. Although at times one may wonder if she is not unfairly treated by her times and society, limiting as it is with its expectations of “proper” female behavior and the limited opportunities for female advancement or even survival, Lady Susan’s own letters give her away as unfeeling towards her own daughter and cavalierly toying with the emotions of men in pursuit of her own motives. She cares not if she breaks hearts or tempts a man away from his relationship with another woman (though perhaps, in at least one case, this will be better in the long term for the young woman in question). Despite the limitations of the form, there is still enough here to form quite an entire picture of the Lady.

Lady Susan is by no means Austen at her finest, but it is an early example of her keen observation of society around her and remains entertaining for all its brevity. It formed the basis for the 2016 film Love & Friendship, a film I have yet to see but which I eagerly look forward to watching.

I read Lady Susan as part of the 2018 TBR Challenge, for “A Classic by a Woman Author” for the 2018 Back to the Classics Challenge, and for my Classics Club list.

One thought on “Completed: Lady Susan by Jane Austen”