How to pick a summer read?

Something light, fluffy, perfect for a lazy summer afternoon?

That thick doorstop you’ve been meaning to get to and now might finally have time for when it’s too hot to do anything else?

Off the top of the tottering tower of to-be-reads threatening to topple over?

The library book you STILL haven’t read even though the library’s been digital-only for over two months? (Uh…is that just me?)

A children’s classic full of its own lazy summer afternoons?

The possibilities–and interpretations–are endless. And it can be impossible to predict: what seems like a “good summer read” in June may be the last thing you want to read come August. But this is one of the joys of summer – more relaxation and fewer rules.

Even since I saw the first posts popping up for 20 Books of Summer hosted by Cathy at 746 Books, I’ve been thinking about what I hope–or expect to read–this summer. Twenty books in a three month period is, unfortunately, a bit of a stretch for me. Well, maybe if I switched to all kid’s lit or Golden Age Detective Fiction. But then I saw Cleo’s clever twist: select a list of 20 books, from which to read 10. Well, I can do that! Um…maybe? (Reference: unread library books.)

So I started going through my shelves. First, I pulled the library books. Because, well…(I have no excuses, really.) Then the books I already wanted to read. Throw in a couple children’s classics that I’ve been hankering to reread. Add a readalong title, a few books that are family loans that have been around longer than the library books (I’m the worst at reading borrowed books, apparently), and leave a space for an Agatha Christie that will have to come from the library, and we have a book stack. 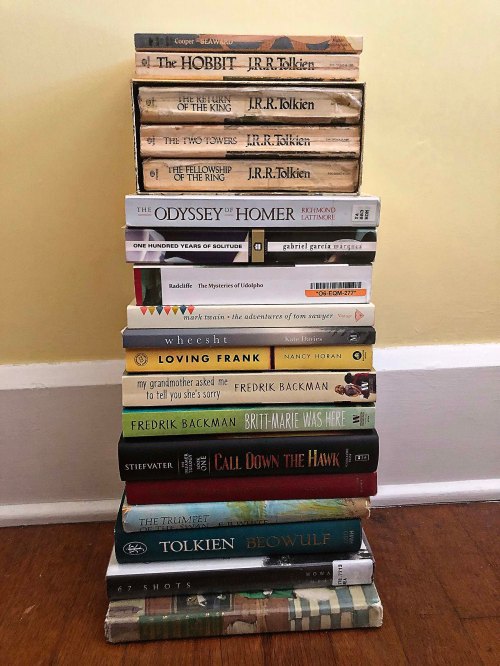 So, you might notice the problem: while I may not have time to read 20 books, it would appear that I’m planning to do so. And then there’s the books that didn’t make the cut but that might sneak in anyways. Good thing we can change our list! And that there’s a summer staycation coming up…