Entry number four in the ongoing Agatha Christie challenge keeps us with Hercule Poirot and Captain Hastings, only instead of a single mystery, we now have a set of fourteen unconnected short stories. (A side note: this is the American edition – the UK edition only contains 11.) These stories originally appeared in magazine format (Sketch in the UK, from April to October of 1923; Blue Book Magazine in the US, from October 1923 to April 1925), and were collected for publication in book format in 1924 (UK) and 1925 (US).

These are much on the same lines as the first two Hercule Poirot novel entries – Poirot exercises his grey cells, Hastings is obtuse, and the mystery is neatly wrapped up in the final pages. (Well…perhaps “The Chocolate Box” is less true to these lines, but it would be spoiling things to say too much.) However, rather than reminding me strictly of The Mysterious Affair at Styles or Murder on the Links, what really sprung to mind were the short mysteries of Sir Arthur Conan Doyle. From reading the earlier novels, it was already apparent that Christie’s characters owed a debt to Doyle, but here I was even more forcefully reminded of his short story format. As in so many Holmes stories, we frequently see Poirot sitting in his rooms when a client arrives with a tricky little puzzle for Poirot to solve. In the opening story, “The Adventure of the ‘Western Star,’” he quickly deduces that the young woman walking up the street is coming to see him. And in “The Veiled Lady,” Poirot bemoans the quality of the criminal class (specifically his lack of interesting cases) and remarks that perhaps he should have taken up criminal acts himself. The ghost of Holmes haunts continually. This all adds up to the suggestion that these are still early Christie. On the other hand, I noticed less of the tendency to have Poirot solve the crime by means  of knowledge the reader doesn’t (and can’t) have; even when he seems to have pulled the answer out of thin air, a revisit to the start of the story shows tracks carefully laid for the reader. And we still get the opportunity to outwit Hastings, who remains remarkably obtuse at times, a perfect foil to Poirot.

All-in-all, they are enjoyable little diversions. None perhaps terribly memorable on their own, but each easily readable in a short bit of time, perfect as the just-before-bed read. 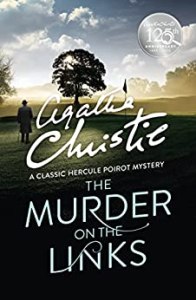 Agatha Christie’s third published novel brings us the second outing with Hercule Poirot and Arthur Hastings. This time, we are taken to northern France, whence Poirot has been summed by a potential client, Paul Renauld, on a matter of some urgency. However, by the time they arrive, Renauld is dead, and the great detective must turn his attention to murder. This is complicated by the presence of the French police, specifically Monsieur Giraud of the Sûreté, who has little appreciation or patience for Poirot’s more thoughtful methods. Hastings for his part is dazzled by Giraud’s activity and on more than one occasion expects that Poirot is out-detected. Of course, Hastings isn’t always the most reliable of observers, and true to form proves easily distracted by a pretty face, further muddling his observational skills.

Unfortunately, I read Murder on the Links about a year ago and didn’t take any notes, so I don’t really remember my response to it all that well, although the general plot of the story has stuck with me surprisingly well. It is a mystery full of twists and turns, questionable identities, and hidden secrets from the past; secrets that once identified, begin to help Poirot’s unraveling of the case. Hastings is perhaps a bit annoying in his obtuseness, and the inclusion of history that Poirot knows but the reader has no access to can be frustrating to the armchair detective. Nonetheless, an enjoyable diversion.

I’ve had a handful of posts drafted for weeks now that I just haven’t made the time to post. I seem to go in fits and bursts with blogging; though, I am happy to report that the reading is still going strong – so many good books already this year! I’ve resolved to start to play catch up, but before I start, I feel a compulsion to deviate a moment.

It’s a strange time. “Surreal” is the word I keep using, for it doesn’t seem real–for so much to be shut down, for the world to seemingly come to a virtual standstill. This is a thing of movies, not real life.

But COVID-19 IS real, and the precautions we are taking–trying to take–are necessary. Fortunately, I haven’t been too impacted yet; my work has yet to directly be influenced (though I anticipate a slow down in new projects while everyone just tries to keep up with things) and working remotely has long been an available option. I’m fortunate, I know, but when I see all the articles or lists of “things you can watch/listen to/read” during these times of “social distancing,” I confess my first thought is “how do you have time?” Of course, this is as much because I’ve never been one to be out and about as it is because I’m still working full time. But if I did want to fill some time–or if I were to make a recommendation–I think Agatha Christie is a good place to start. I find something so comforting–like “coming home” when I read an Agatha Christie, or watch one of the TV adaptations. (I’m particularly fond of the David Suchet Poirot series.) The formulaic nature, the knowledge that it all works out in the end, these are soothing in trying times.

The second of Agatha Christie’s published novels, The Secret Adversary introduces us to the lively Tuppence Cowley and solid Tommy Beresford. Childhood friends, they meet by chance in post-war (1919 – post Spanish Flu, for that matter!) London, both down on their luck and in search of a job—and more importantly, the money that goes with one. Despairing of finding any, they impetuously decide to form The Young Adventures Ltd. and advertise to take on adventures on behalf of others. But before they get as far as submitting the ad copy, an adventure falls in their laps. However, when Tuppence cautiously tells the potential client, Mr. Whittington, that her name is “Jane Finn,” he grows agitated and sends her on her way with £50, thinking it a ploy and trying to buy silence. Curious, Tommy and Tuppence decide to investigate further and advertise for information on Jane Finn. What follows in response to their ad is a delightful romp across post-Great War London and adventure plenty, for the detectives and reader both.

Although there is mystery at the heart of the story—where is Jane Finn? And who is the illusive Mr. Brown who seems to be pulling so many strings and determined to overthrow the current government?—the story feels more like a thriller to me than a strict mystery novel. Perhaps this is because the adventures are so fast-paced, the detectives so green, and the dangers so present on-screen. But in the end, in honest detective-novel form, our heroes solve the crime, and in dramatic fashion. For a change of pace, I nearly had it solved as well! I thoroughly enjoyed this novel, the wonderful 1920s English slang, and the utterly charming Tuppence and Tommy and look forward to more of their adventures. 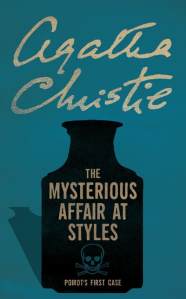 Not only is The Mysterious Affair at Styles Christie’s first novel, it is the first Hercule Poirot mystery. Set in the countryside during the First World War, it is a wonderful coincidence–one that likely enables a terrible crime to be solved correctly–that Poirot happens to be a war refugee living in the neighborhood and that a friend from the pre-war days, Hastings, is staying at Styles House, where the crime occurs. Hastings will prove the Watson to Poirot’s Holmes – though I must say, he strikes me as quite the inferior Watson. He prides himself as an observer and yet he never quite seems to get it–not merely in the detection of crime (for which we could all be given fails, as clever as the mastermind is here), but he doesn’t even seem able to recognize the truth of ordinary interactions between people, including those involving himself. It can be a bit frustrating for the reader at times, although perhaps this is intentional, to allow us a little feeling of superiority even when we fail spectacularly at solving the crime (err…as I always do, at least!)

There are all the ingredients of a typical Poirot novel: a country house setting, a small cast of suspects, a difficult case that the police can’t get right, red herrings, even a set of locked doors posing difficulties. Poirot performs his typical work of genius in neatly uncovering the solution at the very end. And yet–it didn’t quite feel “right” to me. Somehow, I didn’t feel as at home at Styles as have with later Christie novels.  Perhaps this is the reflection of it being a “first” – Poirot didn’t feel quite fully “Poirot-like” to me, yet, though that may because I am not used to seeing him through the eyes of Hastings. But the novel also didn’t feel quite as tight in its execution, and although I am quite used to not actually solving the crime, usually there’s this feeling of “Oh, right…” that didn’t quite happen for me here. So not quite my favorite Christie, but it certainly does nothing to dissuade me from more!