I have a feeling I’m going against the book-blogger grain here, but truth? This book was a bit of a slog. I finished it–it’s on my Classics Club list, I said I would read it for R.I.P., I try to be a finisher–but it wasn’t easy to get through. Or perhaps more precisely, to get into. If you are looking for a thriller, something with action, nothing much happens until well into the novel. Past the half-way point, if I recall correctly. It does have some of that Gothic atmosphere (Mrs. Danvers!) that I was looking for in a R.I.P. read, but I was surprised both that so much of it is set in the summer (a season I associate with sunny cheer) and that it didn’t feel to me as if the atmosphere pervaded the book as much as I’d hoped or expected. Of course once the story really took off, I was much happier with it, but I’m afraid it shan’t be on my year-end list of favorite reads.

In fact, I’m rather questioning my inclusion of Rebecca as a Classics Club read. My general definition of a classic is to quote Calvino, “A classic is a book that has never finished saying what it has to say.” [Note to self–I still need to get back to that essay and post on it…] I’ve also said of “great books” that “I want to be abducted by these books, to have my world-view turned upside down, to lose myself to their seductions.” By these definitions, Rebecca doesn’t cut it for me. It is, I think at heart a thriller. A Gothic thriller, yes. A bit of romance thrown in, yes. Suspense, yes. Decently well written. But. One read seems enough. Of course, I could perhaps make the same argument for the Holmes stories I’ve been reading. So there’s definitely something personal here, too.

I know it’s a personal thing that I’m not enamored of excessive descriptive passages, and Rebecca seems to have plenty such. It seems wordy, verbose. (This is one of the reasons I don’t care for Frankenstein, incidentally.) My attention wanders. Rebecca also suffers for being read closely to other works I’ve been reading lately. After only a few chapters in, I picked up some Faulkner. Given that he’s widely considered one of the greats, it’s probably not fair to compare, but only a few pages into his short story “The Bear”* I was engrossed. Faulkner sets his scene and I’m there. I don’t know how else to explain it, but I was with the protagonist, I could feel the eyes of the titular bear on me, hear the crack of branches underfoot. This, to me, marks a better writer. Faulkner stays on my list, du Maurier drops off.

Then there’s Austen. I’d started a reread of Mansfield Park back in August. The two books are completely different in focus and story but reading Rebecca so close to Mansfield Park does the former no favors. I’m going to enter potential-spoiler territory here (for those who are sensitive to such things) talking about both books, but there is one major similarity between the two: Fanny Price and the second Mrs. de Winter. I’m gonna call foul on anyone who dismisses Mansfield Park simply because they cannot stand Fanny Price for being too timid and shy but who adores Rebecca–our unnamed narrator (who for the sake of convenience I shall refer to as Mrs. 2) is every bit as timid as Miss Price. Actually, I’d say she’s worse–Fanny ultimately proves to have a nice moral backbone, staying 100% true to her own inner compass, but Mrs. 2’s only spine appears when it’s time to stand by her man. Looking at it from a feminist perspective, despite the preference of many of today’s readers of Mansfield Park for the independent Mary Crawford, Fanny Price (predating Mrs. 2 by over 100 years) comes out far ahead of Mrs. 2. Not to say that supporting our loved ones in times of trouble is a bad thing, just that this seems to be Mrs. 2’s ONLY motivation. She is nothing outside of her husband. Fanny, one feels sure, doesn’t need a man to define her. She even turns an eligible proposal down, something unbelievably risky for a woman in her circumstances. Fanny has more depth to her, for a heroine so readily dismissed by 21st century ideals.

As for the story, I found it interesting that for all I’ve heard of Rebecca and Mrs. Danvers being the villains of Rebecca, the real enemies of Maxim de Winter and Mrs. 2 are themselves. Good heavens, why did they bother to marry each other if they don’t even know how to communicate? How long must it take them to figure out that the only real enemy of their happiness is their failure to be honest and open with each other and their tendencies to dwell either on the past or on the imagined? I think here we move towards one reason people keep reading Rebecca, decades after it was first published: there is truth to be found in this book–I’m just not sure it would be newly illuminated in successive reads–this is a book you reread because you like it so much, not for new treasures, I do believe. The impression that I have of the book is that it is usually read for the Gothic thriller side of it, but the more interesting part of it to me is the actions of the non-villain characters. Or the non-actions. That part speaks truth, while on the other hand it’s hard to imagine a real-life Rebecca and Mrs. Danvers.

An interesting read, just not one I could love. (Incidentally, does anyone know if it was considered scandalous when it was first published? I haven’t seen anything to indicate this, but it seems like it should have been…)

I read this for both the Classics Club (supposed to be a Spin read…oops!) and R.I.P. VIII. 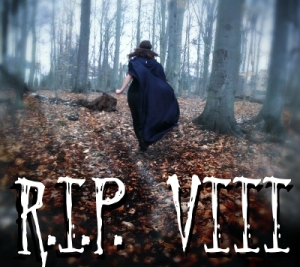 *The version included in the collection Uncollected Stories of William Faulkner, 1997, Vintage International. I believe it is the same as the version published in 1942 in the Saturday Evening Post, but am not certain.

Eep! Between extra busyness at work (they’re expanding–lots of furniture moving going on), taxes (at points yesterday I  was feeling a bit stabby about the number of forms I had to fill out), and other distractions (books, actually!), here it is a good week after I finished The Castle of Otranto and I’m just now getting around to posting about it. Good thing the family Easter dinner isn’t until this evening…

The Classics Spin challenge proved a very effective means of finally returning to my Classics Club list (and also my Sensation! project for that matter). Lucky number 14 in my case turned out to be the novel considered the earliest Gothic novel, Horace Walpole’s The Castle of Otranto.  It is really more a novella, which is a bit fortunate, as I found my reading attention more often directed elsewhere this month.

The Castle of Otranto is the second early (pre-1800) Gothic novel I’ve read (along with Castle Wolfenbach), and so far my impression of the genre–at least these early examples–is that they feel equivalent to today’s bestseller: fast-paced action stories full of unlikely twists and turns and unremarkable prose. Were it not for the archaic vocabulary (more or less difficult depending on one’s familiarity with the language of the era) a reader could zip through these novels in no time. Were it not for The Castle of Otranto‘s status as the first example, I could believe it easily forgotten. True, it might not be fair to compare The Castle of Otranto and Castle Wolfenbach, as the latter was forgotten, assumed a fictional creation of Jane Austen, but I confess I do not find the former any more remarkable or memorable. (Of course, well over a year later, I can still recall Eliza Parsons’s abundance of semi-colons.)

In the preface to the 2nd edition, Walpole claims to be attempting a blend of “two kinds of romance, the ancient and the modern. …in short, to make [the characters] think, speak and act, as it might be supposed mere men and women would do in extraordinary positions.” Whether this was a true motive or merely Walpole’s invented justification for creating a supernatural thriller, I do not know, but I find it a stretch to believe his characters “real,” at least as a 21st century reader. Not only are the women angelically good, some of the men are as well. Only the villain of the piece, Manfred, has any sort of complexity, and his motives and actions seem a bit of a stretch (or at least too susceptible to superstition for the 21st century mindset). In some ways, I find it amazing that we’ve ever believed women to be the more emotional of the species–literature seems to abound with men whose passions overtake their reason and Manfred is no exception. Of course, this could just be another example of the 18th/19th century English prejudice against the “exotic” Italian–Otranto is set in Italy (despite some very Germanic sounding names!)–and this is not the first novel I’ve read by an Englishman to portray the Italians as more susceptible to their passions for the worse. I imagine the foreign setting also made the supernatural elements go down easier with Walpole’s original readers.

Regardless of Walpole’s success or failure at realism–which I admittedly likely judge by different standards than his–his creation of a new genre is in do doubt. It is no wonder that Catherine Morland and Isabella Thorpe discussed with such animation their favorites of the day–they are undoubted entertainment. I was merely surprised that the father of them all seems to have so little meat to it.