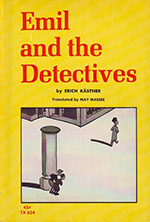 ’Oh he’ll like Berlin, I’m sure of that,’ declared Mrs. Wirth from the depths of the wash-basin. ‘It’s just made of children. We went there the year before last for the skittle club outing. My word, but it’s a noisy place! Do you know—some of the streets were as light at night as during the day. And the traffic! My, what a lot of cars!’ (Chapter 1)

Emil and the Detectives starts out deceptively, Emil carrying the water jug and his mother washing her client’s hair—a scene of domestic tranquility, nothing of adventures in sight. Yet this opening chapter, slow by current standards, is our introduction to Emil and his character: he is obedient and polite, determined to do right by his mother. Which is why it is so important to Emil, when the one thing she warns him against happens, losing the money she gives him for his grandmother, that he make it right. Especially since he feels particularly wronged; he didn’t lose the money, it was stolen from him after he fell asleep on the train, despite all his precautions, both to protect the money and stay awake. It is from this point that the story takes off; Emil soon meets up with a group of boys who upon learning his story are only too happy to help him chase down and trap the thief. His cousin, Pony, the only girl in the story, makes occasional appearances with her new bike—which she is only too eager to show off—functioning as messenger or go-between with Emil’s adult relatives. We also see other aspects of Emil’s character–his determination to right a wrong, a bit of temper (he nearly fights the first boy he meets), and a hint of mischief: he believes he can’t go to the police, because he chalked a statue at home and believes the Berlin police will surely learn of it and accuse him of stealing the money!

I’m really not quite sure what I expected from this classic from 1920s Germany. Perhaps more of a mystery, but the detective work in this story is tailing a known suspect, not discovering “whodunit.” Of course, this makes for an exciting adventure, and the reader never really cares that we know the thief already or that we feel fairly assured of a positive outcome. After all, there are still plenty of twists and turns and we can’t be sure, exactly, how the boys will manager to confront the thief and reclaim Emil’s money.

A German writer, Kästner would some years after writing this children’s tale watch the Nazis burn many of his books, including the sequel Emil and the Three Twins. But they didn’t include Emil and the Detectives, in part because of of its popularity. It’s been adapted for several film versions, including multiple German versions and the 1964 Disney adaptation, as well as a UK stage production. 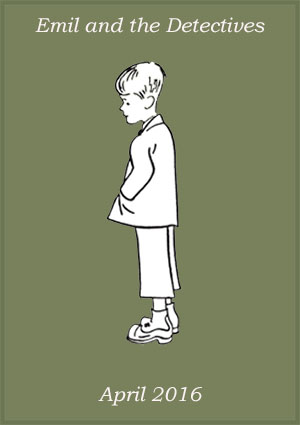 As well as reading this for the readalong, it also counts as one of my titles for the Books in Translation Challenge 2016.

8 thoughts on “Completed: Emil and the Detectives”

The Trumpet of the Swan – E.B. White